Robert Regrets Having No Strings Attached 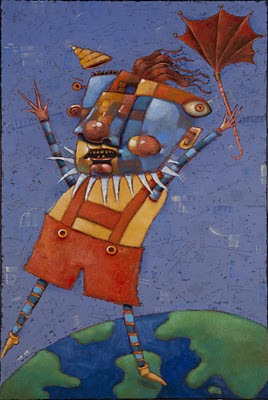 36x24" oil on canvas, available
Der Struwwelpeter is a popular children's book written by German psychiatrist,  Heinrich Hoffmann in 1854 for his son. The book consists of ten illustrated and rhymed stories, mostly about children. Each has a clear moral that demonstrates the disastrous consequences of misbehavior in an exaggerated way. The Story of Flying Robert, is about a boy who goes outside during a storm. The wind catches his umbrella and sends him to places unknown; presumably ending in disaster. A nice little bedtime story…
In the country or the town,
All good little girls and boys
Stay at home and mind their toys.
Robert thought; "No, when it pours,
It's better out of doors." Rain it did,
And in a minute Bob was in it;
Here you see him, silly fellow,
Underneath his red umbrella!
What a wind! Oh! How it whistles
Through the trees and flowers and thistles!
Oh! It has caught his red umbrella!
Now look at him, silly fellow,
Up he flies to the skies!
No one heard his screams and cries!
Through the clouds the rude wind bore him,
And his hat flew on before him;
And the hat went up so high,
That it really touch'd the sky.
Soon they got to such a height,
They were nearly out of sight.
No one ever yet could tell
Where they stopp'd or where they fell.
Only this one thing is plain,
Bob was never seen again...
Posted by Brenda York at 8:47 PM

Email ThisBlogThis!Share to TwitterShare to FacebookShare to Pinterest
Labels: available

My husband's name is Bob. I'm going to save this. Thanks.

Enter your email to get my paintings in your inbox-fresh off my easel and my monthly newsletter too!